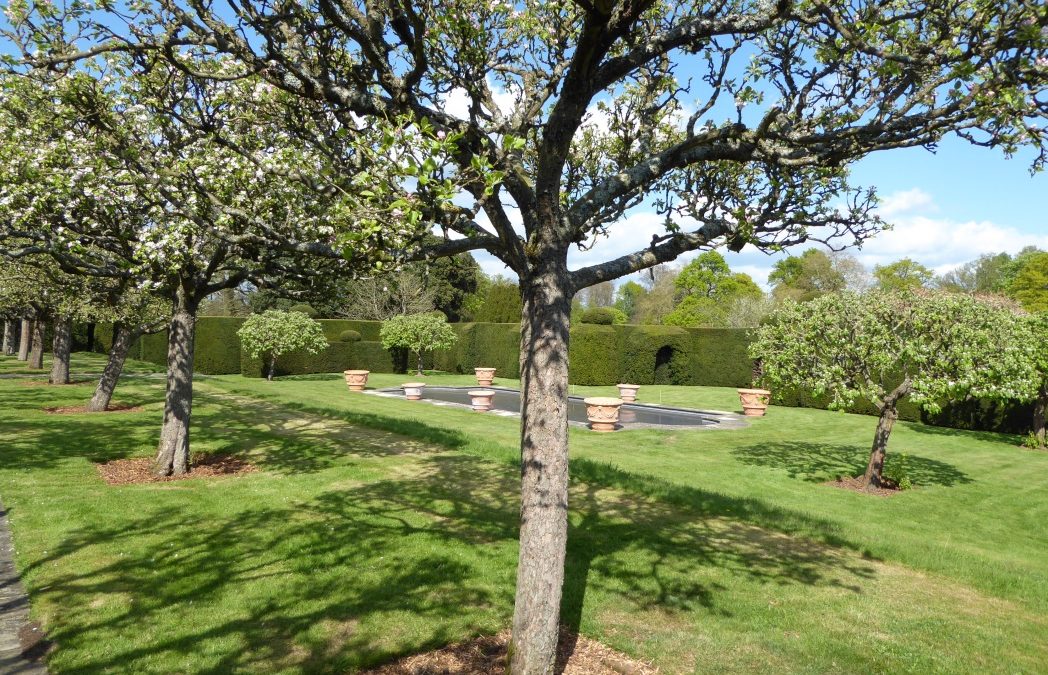 A Collaborative Approach to Development

In the spacious surroundings of the Riding School 44 delegates were treated to talks on three very different aspects of conservation and development.

Kate Harwood’s first slide (Figure 1.) was a shocking collage of some of the many Hertfordshire houses that have been demolished – the trend, which was nationwide by the 1950s, started as early as the 1930s in Hertfordshire. She pointed out that the house was in reality just the biggest ‘garden building’ and so, once it disappears then the setting often does too. 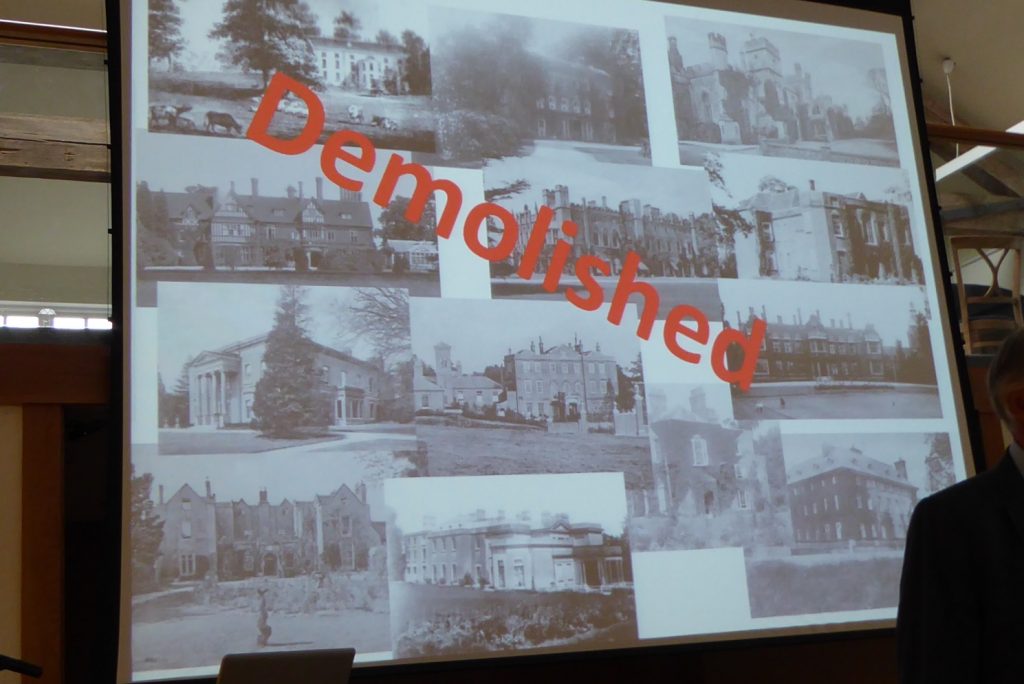 Figure 1. Some of the lost Hertfordshire houses

Threats come in many different forms and for a variety of reasons. Ignorance can result in misguided restoration, such as at Panshanger where the back-filling of the gravel extraction pits bears no relationship to what was intended by Repton and a huge fence with slots for bird watchers totally obscures one of the most important views. Lack of money and/or care is a problem, along with relaxed planning laws allowing massive extensions to garden buildings, such as The Lodge at Julien’s. The major roads needed to move our increasing population often split estates and Kate cited the A10 at Youngsbury, the A41 at Tring and the A414 at Panshanger as just a few examples. Other threats examined were the massive house building programme, golf courses, fields of solar panels and inappropriately sited wind farms.

On the positive side, Kate highlighted the work of the HGT mobilising the Woodland Trust to restore the dramatic views and rondpoints at Tring Park; persuading the Local Authority to take responsibility for restoring the Flint Fishing Lodge at Brocket Park and, by education and persuasion of the multiple owners, preserving the Bridgeman landscape at Sacombe Park. Heritage assets are irreplaceable and the work of groups such as the HGT and various Friends organisation are vital to balance the power of rich developers by ensuring that Sustainable Development principles are followed.

Anthony Downs, who heads up the Planning and Development side of the Hatfield House estates, (Gascoyne Cecil Estates) presented a persuasive case for a Green Corridor (Figure 2). This would be made up from woodland, grassland, arable land, golf courses, orchards and wildlife reserves. Thus, not only would the free movement of wildlife be assured, but also – by joining existing access with new footpaths/bridleways/cycle tracks – the area would be an important civic amenity allowing easy east/west movement. However, Anthony pointed out that the proposal for Birchall, which has a central green space on land historically used as a dump for London’s rubbish, would block this corridor as the houses and roads are around the outside.

Figure 2. The Green Corridor from A Green Infrastructure Strategy for Central Hertfordshire. pp. 16

As in the post-war era, new houses are needed and two sites for development have been proposed. The Symondshyde development would be along the lines of an estate village using the principles of the Garden City movement with high quality housing, shops, a pub and a primary school. Since it would be developed by a single owner, who lives locally, there would be clear design guidelines – which would be followed. In answer to a question, Anthony contrasted this to a hypothetical situation in which the Cecils sold the land to developers to make a ‘quick buck’ and housing was erected with no thought for anything but the bottom line.

There would be a 1km protected gap between the new village and the proposed extension at Stanboroughbury, which it is hoped would feel as if it were part of Hatfield and not just another urban sprawl. The clear aspiration is to show it is possible to build something of beauty today.

The Danesbury Fernery project (Figure 3) is a shining example of what can be achieved with no money but a great deal of determination and enthusiasm. John Roper, who is leader of the Friends of Danesbury Park Volunteers, gave a beautifully illustrated talk on what had been achieved since September 2015 to restore what was described in 1881 as ‘the best fernery to be found in the Home Counties’. It was designed in 1859 by Anthony Parsons for Danesbury’s owner William John Blake and built by James Pulham & Son of Broxbourne. The chalk pit in which the fernery is situated was so overgrown in 2015 that it almost looked like level land, partly because about two feet of builders’ rubble had been tipped there. The local Council, glad to be spared a £30,000 bill for the restoration, helped by poisoning tree stumps and providing a mini JCB to excavate the worst of the rubble. 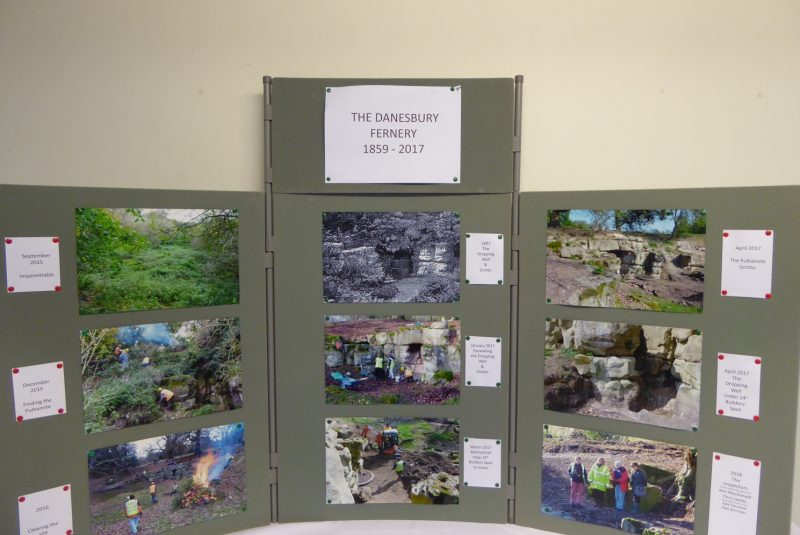 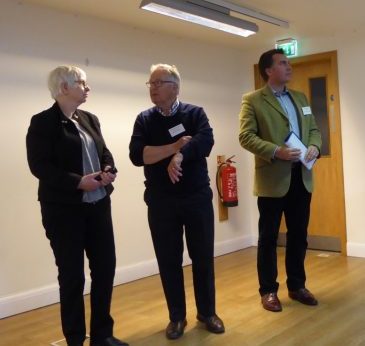 To date the dropping well, gorge, water cistern and basin for the cascade have been uncovered and work is well underway in restoration of the paths. In addition, a 1-metre diameter vase or urn has been recovered – probably Pulhamite. The current focus is to replant ferns to the planting holes and John explained this requires volunteers with a different skill set from the ‘scrub basher’! Research is underway to establish how the Victorians got water to this dry site and how they recirculated it to provide the correct environment for the ferns and atmosphere for the grotto. All speakers (Figure 4) then answered questions. 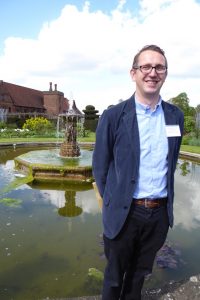 After a delicious lunch, we were then treated to a sunlit tour of thegardens with the new Head Gardener, Andrew Turvey (Figure 5). He has only been in post for 9 weeks but already achieved significant changes. This has been possible because the garden is privately owned – so decisions for major changes can happen over lunchtime rather than the weeks or months of due process needed for English Heritage, for whom Andrew previously worked. The late Dowager Countess focused on the formal gardens near the house, but the present Lady Salisbury is developing the informal, more distant gardens.

It was interesting to listen to Andrew’s vision for the development in the garden, which ranged from the small – gravelling unsustainable grass (Figure 6) through the medium sized – planting a Hornbeam avenue to the large scale. One example of the latter was the conversion of a swimming pool to a reflective Lily Pond (Figure 7). Andrew is a very ‘hands on’ Head Gardener and gave a most amusing account of his underwater tree felling activities to clear the island in the Lake! A great deal of manpower at this season is devoted to rose pruning and box hedge clipping, which makes his accomplishments in such a short time all the more impressive.

The Study Day provided a stimulating mix of viewpoints on the different aspects of development and was much enjoyed by the select band who attended. 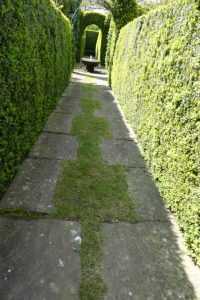 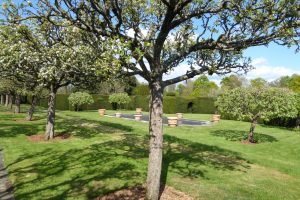